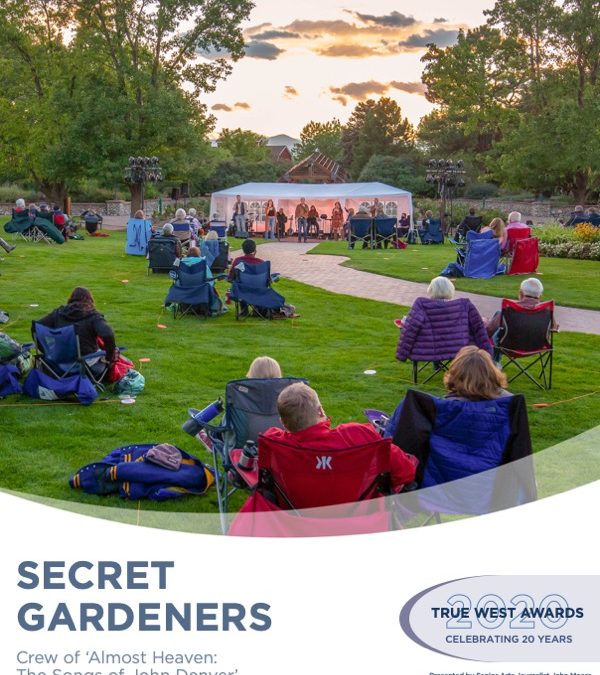 With so many (many) lousy things to come out of the COVID shutdown, you have to appreciate it when something truly lovely comes out of necessity and innovation. Like taking in an early fall sunset at The Hudson Gardens listening to the lyrics of John Denver as birds fly overhead: “I guess he’d rather be in Colorado. He’d rather spend his time out where the sky looks like a pearl after a rain.” With other humans. During a pandemic. Under a sky that looks like a pearl after a rain.

And it was an experience that was never in the Town Hall Arts Center’s plans before the virus forced a creative shift in thinking.

“Almost Heaven: The Songs of John Denver” was scheduled to open inside Town Hall on April 3 when rehearsals were stopped. But rather than shut the production down altogether, Director Nick Sugar’s creative team scrambled for a solution that turned out to be good enough to be true: The re-imagined show eventually went on as an outdoor, botanic experience that perfectly matched the tenor of John Denver’s music.

And it took some heavy behind-the-scenes lifting to make it happen. The Town Hall team had to set up a 40-foot band tent, two trees of stage lights, speakers, other sound equipment and socially distanced audience pods before every performance. And then take it all down again in near total darkness. And do it all over again 18 times over the course of the next month for the enjoyment of 1,500 patrons who surely had no idea how much muscle it took to pull off.

“We had to leave it exactly as we found it every night so that The Hudson Gardens could operate as normal the next day. It was a Herculean group effort, for sure,” said Robert Michael Sanders, Town Hall’s Education Manager.

Note the title. It was the Education Manager’s job to keep the crew moving on schedule. And that nighty “crew” included several people with titles you don’t always associate with “crew”:

Here’s how Sanders describes how the operation went:

“The whole staff would arrive at 5 p.m. to set up the tent and run power from the main building out onto the lawn. We set up the light trees and ran LED lighting strips into the tent, made sure the band had power, and then placed all of the speakers and subwoofers. Meanwhile, Matthew Kepler handled all of the set-up at the front gate for arriving patrons, as well as ticketing – and laying down pods in groups of four, each placed at least 6 feet apart and 25 feet away from the five performers. Hudson Gardens provided a dressing room for the actors, and costume assistant Mikayla LaMantia was there every night to clean and deliver the costumes.”

Because there was no actual stage in the gardens, performers Matt LaFontaine, Alison Mueller, Mark Middlebrooks, Zach Stailey and Tasha Waters sang for nearly two hours while standing in the grass. And the second the show was over, the entire crew jumped back into action, moving everything back into a large storage shed on the Hudson Gardens’ grounds. “We essentially reverse-engineered it,” Sanders said. “Except now it was all in the dark.”

That effort included band members Donna Debreceni, Mitch Jervis, Scott Alan Smith and Larry Ziehl lugging their keyboards, drum kits and guitars from the park back to their cars each night.

Sanders says the plan was masterminded along with Technical Director Mike Haas and Sound Designer Curt Behm, though it took yeoman effort from 11 full-time Town Hall staffers, along with another dozen volunteers and part-time box office workers (Kendra Pierce, Nannette Brown, Amy Calonder, Tamara Jarrett and Dave Johnson) to pull it off every night.

“It was all hands on deck for anything,” Sanders said. “We grabbed anyone who had knowledge in anything.” Even if that meant the Town Hall Marketing Manager learning how to plug in sound and set up lights.

Miraculously, none of the performances were lost by weather. “Although sometimes the cords were frozen because it was so cold,” Sanders said. “And there were two shows where crew had to run up and hold the tent up during a microburst.”

And in the end, was it all worth it?

“Absolutely,” Sanders said. “Even with that amount of work, we would do it all over again in a second. The quality of the entertainment was high, the safety was well thought-out, and audiences were desperate to be entertained in a reasonable, responsible environment.”