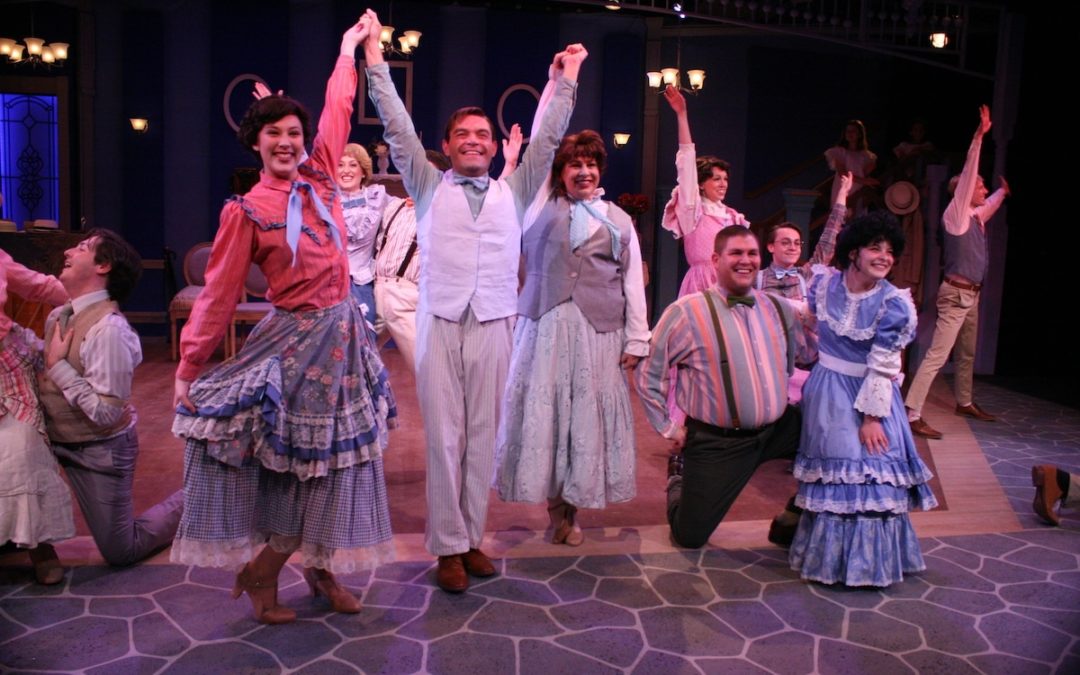 The St. Louis World fair was in 1904. The film, Meet Me in St. Louis, starring the incomparable Judy Garland, came out in 1904, and the stage musical based on the movie played in 1989. Town Hall Arts Center has currently staged it in this chaotic, turbulent era of cell phones and the internet, and it provides a stark contrast to life in 2019.

That contrast may be the charm of Meet Me in St. Louis with music that is rather simplistic, like the times and a book so insipid in it’s cheerful, idealistic presentation of one family’s day to day life on the eve of the St. Louis World Fair that it becomes mind numbing like a Hallmark Channel Christmas Special.

The show is rather unremarkable in that it was only nominated for four Tony Awards and received none. That may be attributed to the story which is severely lacking. A world in which having dinner an hour earlier causes so much bedlam and turmoil, hardly provides the dramatic narrative or emotional complexity that most Broadway successes ensue and most audiences have come to expect.

Even so, there is some comfort in dwelling in this era and relishing in a show so squeaky clean that you can still smell the lye in the water. Town Hall is smart in producing this musical during the holidays. It’s kid friendly and fun for the whole family with no fear at all of any vulgarities or questionable themes.

Given that, THAC gleefully embodies the production and presents it with much aplomb and competency. The cast is rather large for the small theater, but never seems to crowd the stage or overwhelm the space. Bob Wells has staged them with expertise  in such a way as to use the small space to their advantage. The clever staging excels in it’s execution especially during the Trolley song when Scenic Designer Michael R. Duran manages to not only bring one on stage but manages to drive it around with passengers on board and a conductor mapping the way.

Choreographer, Kelly Kates also takes advantage of the cast creating dance numbers that fill the stage with joyful abandon and provide some of the more exciting moments in the show. The choreography is most effective in the finale, when the entire cast gleefully dances in evening gowns and black tie.

Terri Fong-Schmidt can take credit for those, having already provided numerous period costumes throughout the show she meets the challenge head on of putting  all the men in tails during the shows final moments. Her costuming never disappoints in Meet Me in St. Lluis, and provides much of the success in conveying the era and time of the St. Louis World Fair.

Music direction by Donna Kolpan Debreceni is at it’s best, showcasing strong solo  voices and wonderful sound from the ensemble numbers. The accompaniment is prerecorded, but the actors sing with it as if there was an orchestra playing live backstage and it blends seamlessly with the superior singing voices of this cast.

Meet Me in St. Louis at Town Hall Arts Center is sweet and innocent, making it a family outing perfect for those willing to leave the trappings of modern life behind and embrace the simplicity of 1904. Meet Me in St. Louis, Louis, meet me at the fair, but if you are looking for an innocent, non-feather ruffling show with an enthusiastic cast, delightful period costumes and some great singing voices, you must meet me at Town Hall Arts Center.

Have yourself a Merry Little Christmas with MEET ME IN ST. LOUIS, delighting audiences now through December 29th in Littleton, CO. For tickets or more information, contact the Town Hall Arts Center Box Office by calling 303-794-2787 or online at www.townhallartscenter.org.